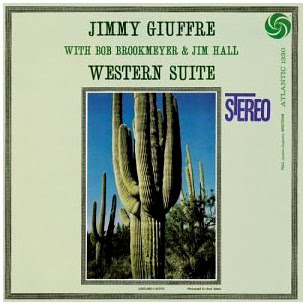 Bob Burnett: A few weeks ago I wrote about the Bill Evans Trio, a group of admirable innovation and mind-reading interplay. After writing about the Bill Evans trio I recalled another trio group of that era that made a great album. The group is the second iteration of the Jimmy Giuffre 3, made up of Jimmy Giuffre on clarinet, baritone and tenor sax, Bob Brookmeyer on trombone, and Jim Hall on guitar. One doesn't think of a line-up of this particular instrumentation too often (John Zorn, George Lewis and Bill Frisell's "News For Lulu" trio comes to mind), but they were masters together. There was a quiet perfection within this group. Their interplay was subtle, engaging and witty.

Jimmy Giuffre was an unsung hero of the soft, spacious side of jazz—sometimes limited by the description called West coast "cool" jazz. He made some of my favorite trio music—in this unique group as well as the completely different one that was to follow that featured Paul Bley on piano and a 19-year-old kid named Steve Swallow on bass. Regardless of the line-up his groups were contagiously rhythmic, yet never contained drums. On this album Bob Brookmeyer cleverly twists and turns in support and in lead; Jim Hall takes the traditional hollow body electric guitar sound someplace entirely different; and Giuffre himself leads with great creative clarity.

Western Suite contains three compositions—an original, the title track broken into four movements, and two cover songs, the instantly recognizable "Topsy" and Thelonious Monk's "Blue Monk." Giuffre, Brookmeyer and Hall played together for the year preceding this album and became incredibly tight. When the trio played the Newport Jazz festival in July of 1958, Giuffre called it "probably our best public performance—and I wanted to get what we had achieved on record at least once before the trio disbanded." So the results came in December 1958 when this album was captured live in front of an invited audience.

You may wonder why such a talented group would disband. Jimmy Giuffre decided it was just too difficult to sustain a unit that thrived on such subtle interplay in the raucous and generally indifferent audiences of nightclubs, at the time essential to their existence. So, instead of suffering through the anticipated agony of loud conversations, guffaws, and inconsistent club acoustics, they collectively realized they had reached a high point and called it quits at the peak of their skills. "In what we were doing," stated Giuffre in the Nat Hentoff-penned liner notes, "there wasn't a rhythm section sound to cover anything up and it was essential for each player to be constantly aware of the requirements of his own sound that would blend with the group and keep it moving."

The group may have been short-lived. However, this recording is now recognized as a classic. In fact it was one of the 50 albums that Atlantic Records' founder Ahmet Ertegun chose to be re-issued as part of Atlantic's 50th anniversary in 1998.

Sadly, Jimmy Giuffre now suffers from Parkinson's disease and is out of the public view. However, he left an incredible body of work for us to tap into for years to come.


For the Amazon link for this CD, click on the picture.


Mike Johnston: Note also that the Giuffre/Bley/Swallow trio's The Life of a Trio: Saturday and The Life of a Trio: Sunday have recently been uploaded to emusic. Very enjoyable. Having never heard Western Suite or anything by Giuffre's Brookmeyer/Hall trombone trio, I'm curious to compare them. I can only imagine how different they are just based on the very different instrumentation.
Posted by Mike Johnston at 8:51 AM