Songs About Nothing: Jason Lescalleet 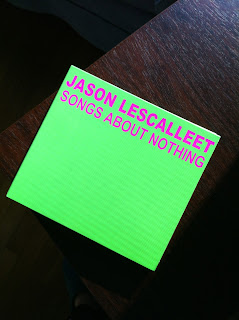 Bob Burnett:  A review of "Songs About Nothing" by Jason Lescalleet (released on Erstwhile) from Volcanic Tongue that captures the release well.

Stunning double disc collection of mind-erasing loops, avant classical drone and minimal cold wave threat from Jason Lescallett, presented as a back-handed tribute to Big Black’s notorious 1992 album Songs About Fucking: Songs About Nothing is the sound of pure entropy, moving from ear-scalding feedback sculptures through nod-out minimal synth repetition through scrambled choral works and widescreen soundtrack drones. The first disc unfolds in a series of stately movements linked by a form of oblique progressive logic with an increasing atmosphere of all-out psychosis until it feels like you’re listening in on advanced surveillance electronics or experiments in sonic/psychological warfare (a quality which often marks out the most extreme Lescalleet recordings). The second disc consists of one massively extended track which expands on the ‘narrative’ feel of the first disc with the sounds of helicopter blades, distant cries, riot tones, hallucinatory/piercing upper register violence and huge blocks of eviscerated silence, with aspects of Masayoshi Urabe’s convulsive approach to orchestrating nada. A stunning release from Lescalleet, his best to date, and a set that demands to be explored repeatedly in depth. This is hardcore. Highly recommended.