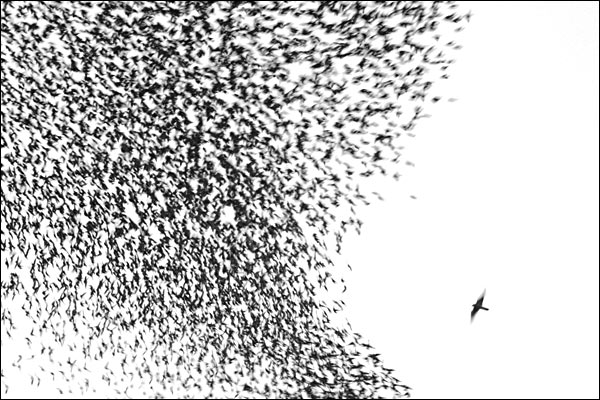 Bob Burnett: Sometimes you just want to play some songs. And that's exactly what Wilco does on their Sky Blue Sky album. This is an album of convergence; where a group of people in a band have found a place in time that is comfortable and thoughtfully realized. Instead of making a big, complicated and anxious album Wilco has taken a breath and gotten together to make songs that reflect being at a moment of solid collaboration.

The album was created in their studio space--the Wilco loft; in fact guitarist Nels Cline, keyboardist Mikael Jorgensen and audio engineer TJ Doherty set-up beds and lived in the loft too. The overall recording has a lived-in style too-- to such a degree that a song ends and you can hear the room tone of the space lingering as it fades out; an occasional amp hum or

realization of the space itself further evolves the authentic environment of the songs and group interplay away from the commonplace recording practice of pristine vacuum-like "silence". This vital listening experience environment created on Sky Blue Sky reminds me when Neil Young and Crazy Horse made Ragged Glory in their barn of a rehearsal space. In addition to sounding like simultaneous group interplay the bonus for me on Ragged Glory was at the end of each song hearing Young's sustained feedback floats which added beautifully to the song's impact. Likewise, each of Wilcos' songs rise to become special moments too--because they feel like they capture people playing together in a sharp and creative way.

I hope if you buy this cd you go the extra step and get the version with the DVD. Not only do you get many Sky Blue Sky songs in a live setting (while rehearsing in November 2006 in the Wilco loft) but you get to further experience the comfortable ambiance of the space that the album was made and hear insights, thoughts and ideas from the band--most notably in depth and thoughtful perceptions by singer/guitarist and main songwriter Jeff Tweedy. Watching the DVD further gels the sense of compatibility Wilco has found at this point in time. 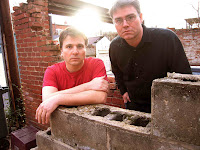 Christoph Green and Brendan Canty (photo by Jim Saah)
The video was shot in a very loose, handheld manner that feels like the album sounds--not contrived and nicely in the moment. Producer/Director Brendan Canty and Wilco's sound engineer TJ Doherty captured the sound wonderfully and cameraperson Nikos Kourkoulakos and co-Producer/Director and cameraperson Christoph Green not only captured the band playing live but created a body of complimentary interstitial images; abstract close-ups from Wilco's homebase of Chicago, quirky and interesting"objet d'art" in Jeff Tweedy's home (where the interview with Tweedy took place), Chicago winter weather and some of the most beat-generation inspired dancing dust particles you'll ever experience.

This is a great effort--a very rewarding listen. Don't believe the reviews that disparage this album as a weak one in the shadow of their past albums. Sky Blue Sky deserves its own place in the exceptional body of work Wilco has produced.
Posted by Bob Burnett at 10:43 AM