The Dream Syndicate:The Days of Wine and Roses 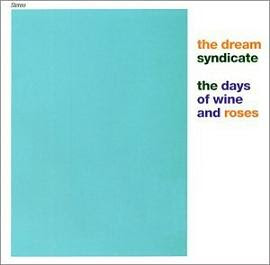 Kim Kirkpatrick: The urgent, agitated jangling noise and feedback on this recording will definitely clean out your head. The Days of Wine and Roses is a classic early eighties Paisley Underground rock release. Paisley Underground was a tag attached to Los Angeles bands of the mid eighties that seemingly were repeating (in the same geographical location) a psychedelic/folk rock explosion that included The Byrds, Buffalo Springfield, The Doors and others long forgotten. The eighties “version” included such bands as The Three O’Clock, the Rain Parade, The Long Ryders, Green on Red, and the Bangles (gasp!).

The Dream Syndicate was an esoteric name choice, a nod to Tony Conrad’s experimental group of the early sixties, a line up that including John Cale of The Velvet Underground. And The Velvet Underground (here we go again) is an essential connection to the sound of The Dream Syndicate. Both bands were outside the musical scenes of their time. In the sixties The Velvet Underground stood alone, with a dark, on the edge, NYC attitude and reality. Meanwhile San Francisco based bands such as The Grateful Dead, Jefferson Airplane, Quicksilver Messenger Service were creating serpentine launching pads for alternate realities, encouraging people to expand their consciousness, to get back to the earth, back to Eden, love love love.

The Velvet Underground would stretch out live, and The Dream Syndicate certainly was capable of expanding upon and bending our eighties reality, moving their songs into feedback laden, jagged journeys. Like VU though, The Dream Syndicate was convulsive, unreliable, and more aligned with heroin or cocaine then any mind-expanding hallucinogen. They were not about bringing people together; they were loners, expressing pain, cynicism, and desperation. Two strong individuals provided the focus for these two bands. Steve Wynn was the leader of The Dream Syndicate, and like Lou Reed he dominated the group, doing nearly all of the songwriting and singing, the man upfront, the man in charge. Reed and Wynn were, and are ultra cool, with tough personas, and they share a hardened view of the world.

Virtuosity was never the point of either band, with no one up front wailing out dominating, “look at me” guitar solos, no bass or drum solos, instead they were focused on creating a group sound, an atmosphere that defined both bands. Steve Wynn formed the Dream Syndicate, with Kendra Smith on bass, Karl Precoda on guitar, and Dennis Duck on drums. This was the bands original line up, the one that recorded The Days of Wine and Roses, released in 1982 on Ruby Records. I have read the album’s name was from a poem by the 19th century writer Ernest Dowson. But the title track makes it clear Wynn was responding to the 1962 movie, The Days of Wine and Roses which starred Jack Lemmon and Lee Remick as two seemingly normal people taken over by alcoholism. The movie fits Wynn’s intelligent, poignant, pained outsider perspective:

Karl Precoda, the lead guitarist* was not a masterful guitar player, pretty simple playing actually. But his feedback improvisations, his almost collapsing sound, “of the moment” playing style, still produce a knowing, mischievous smile on my face. He is all over the title track and most every song on this release. Precoda’s noise is a true link to the psychedelic sixties and to VU. His playing goes to the heart of the song, it feels true to Wynn’s lyrics. At the same time his playing often moves in a singular, detached way around the fringe of a song, like he isn’t completely in his body or the current reality he is participating in. The Dream Syndicate with Precoda, Smith, and Wynn were destined to fall apart; you can hear it in their desperate, powerful music. Kendra Smith left after this recording, joining up with David Roback of the Rain Parade to form Opal**. Karl Precoda fell from sight for quite awhile, resurfacing in the nineties with Last Days of May a meandering, jamming, fusion style band. Last I heard Karl was a humanities professor at Virginia Tech. Steve Wynn has been working consistently since the demise of The Dream Syndicate, releasing over a dozen solo recordings as well as three with the group Gumball. I own my share of post Precoda/Smith Dream Syndicate releases and solo Wynn music, some excellent material too. But any subsequent music by The Dream Syndicate (and it’s members) never was as powerful a tempest (or as tenuous), as the original line up.

The Days of Wine and Roses is an essential album, unique in its time, and clearly influential to many a band since. Within this music I hear links to The Doors, Neil Young, Television, Gang of Four, and certainly Yo La Tengo, to name a few. The current Rhino CD release is re-mastered and also includes a preceding EP, which is generally sparse and thin in comparison to the perfection of the full length’s songs. The Dream Syndicate utilized the rock music of their past and those around them, owned it and created an original sound that holds up well almost 20 years later.

*
Karl Precoda is not a lead guitarist in the traditional sense, he
does not step up and take over a song so much as color it, give it
the proper atmosphere and fragile possibility of implosion.

**
When Kendra Smith left Opal she was replaced by Hope Sandoval, and
later was part of Mazzy Star with David Roback.
Posted by Bob Burnett at 2:47 AM