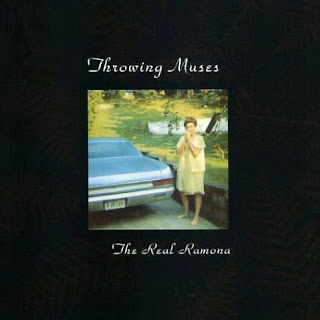 Mike Johnston: Throwing Muses' untitled first album (left), which I have on vinyl and CD, has had a furtive history. The band was the first American group signed to the then-white-hot English label 4AD, and Kristin Hersh's songwriting, like Monk's piano-playing, arrived fully formed (as a friend once put it, "she's an 'is-type' artist, not a 'growth-type' artist"). The album was arguably the most seismically significant debut since Dylan's—genuinely life-changing for many people, many of whom were women. But it was never released in America—has not been to this day, although you can find all ten of its songs on a Rykodisk archive CD called In A Doghouse

, grouped with an early EP and some demo tapes once famous as bootlegs, in murky, bottom-of-a-[wishing]-well sound.

That sort of thing is fine with "just music," but great albums are holistic artistic creations that deserve to be respected as having an intended sequence and arc, a defined beginning and end. To have the untitled debut relegated to such treatment (while better, I suppose, than if it were not available at all)—well, it's a tawdry fate for a record that ought to be celebrated as one of the artistic high points of the 1980s. Throwing Muses as first constituted, in a 1986 4AD promo photograph. Drummer
David Narcizo, Kristin Hersh, Tanya Donelly, and bassist Leslie Langston.
Despite my appreciation for the first album, I eventually drifted away from the band. Nothing could match the vivid intensity of the emotions on the first album and, starting at about Red Heaven in 1992, Hersh's high-frequency hearing had obviously started to go, and consequently the recordings are loaded with so much excess high-frequency energy that they verge on painful on anything but an old silver-faced receiver with tone controls. The Curse hurts my ears—it makes me yearn for earplugs even at moderate volumes—and Hersh's almost unlistenably shrill solo record Hips and Makers was the last thing of hers I bought, although I admit I feel guilty about it sometimes. My respect for her and her songwriting has never abated.

I also think I respond to the Lennon/McCartneyesque dual-personality interplay of Hersh and her stepsister Tanya Donelly in the band's early days, and just plain miss it in the later albums. Donelly was tagged as being more of a "pop" influence than the angrier, more raw-edged, mentally tainted Hersh, and perhaps that's true in the superficial way of most such generalizations. But although the two couldn't get along in the end—Donelly had already formed The Breeders with The Pixies' Kim Deal by 1988 as a side project—their powerful synergy and complementary push-and-pull (and perhaps their interpersonal friction, too) gave the band's early projects a compelling, lively volatility. 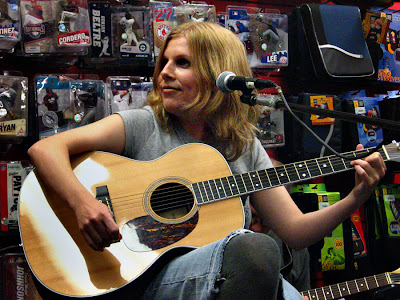 Tanya today (2006)
Which brings me around to The Real Ramona. Recorded in 1991, it was the band's fourth album and Donelly's last with the Muses, at least until their 2003 reunion. Although it doesn't reach the artistic heights of the untitled album (few records by anybody do), The Real Ramona is the band's most rollicking, zany, and ear-friendly release, and a pleasure to listen to—the production is solidly mainstream and all the songs are superb. It's the TM album to own if you're going to shelve only one, IMHO. Who knows why it's so little remarked on or listened to now? It's never gotten its due as a great record. Maybe the band's coldness to commercial ambition; maybe the chaotic, confused state of music at that time; maybe a touch of good old Murkin misogyny? I have no clue.

For me, it will always be a desert island disc, reserved for savoring at increasingly longer intervals, but each listen a special occasion.