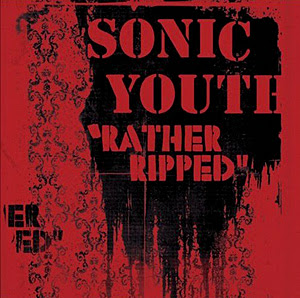 Bob Burnett: I found it fascinating when critics started writing that Sonic Youth’s fans would be in hand-wringing woe because Rather Ripped was a fairly straight-ahead album. Seems there was fanzine speculation that the world’s most popular blast-first-play-normal-later band were being a bit too easy to comprehend and likeably melodic when the album came out last year. Call me a backsliding candy-coated heretic in the church of Sonic Youth if you must, but I really like the way the album stylishly…rather rips.

2005 was a busy year for Sonic Youth; lots of touring and a change in the band when C60 A-lister (at least for me) musician/producer/sound designer Jim O'Rourke amicably left his multiple playing-producing duties in the band to concentrate on studying the Japanese language and further exploring film scoring. With that shift SY found themselves back to the Kim Gordon / Steve Shelley / Lee Ranaldo / Thurston Moore core unit. That step back in time must have urged them into thinking about straight-ahead and driving Crazy Horse meets The Velvet Underground style music—crunching guitars, steady drums, whirling but melodic feedback moments—and great hooks. And so with a discovered simplicity in tow, they went to hometown New York's Sear Sound Studio to capture that sound with a fresh tech crew to help. Jim O'Rourke did the engineer/studio type duties for the group too. He recommended engineer T. J. Doherty and mix engineer John Agnello, referred by Dinosaur Jr.'s J. Mascis, to work on the sessions.

And somehow with all the changes in playing, changes in studio, and changes in recording crew, they found solid consistency; Rather Ripped plays well song-to-song. The album makes it fun to feel music and get absorbed in the pulse and energy going on. Granted there are plenty of glimpses into SY’s classic spirit of a trash can full of cheap guitars, namely rich guitar chord arpeggios, minimalist composition and odd tunings, but the story arc for me is the mature feel they achieve that comes from making music together for a long time—this being album number 22 or so of their career.

I'm sure we'll continue to have multi-faceted directions in the future with Sonic Youth. I'll continue to be there when they move away from being on the Billboard charts at #71 like this one was; they are bound to offer more free-form avant-squall challenges in the future. But as the waves of exploration in sound phases float hither and yon for Sonic Youth, I sense I'll also continue to enjoy Rather Ripped for its glowing furnace of fresh rock.