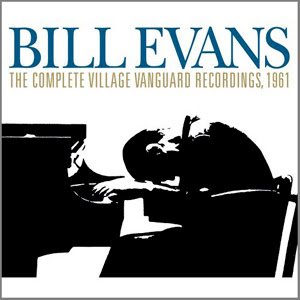 Bob Burnett: June 21, 1961 has become a legendary date of reflection and remembrance for jazz listeners. It was the day that Bill Evans' trio was recorded on a beat-up 2 track Ampex recorder down a flight of stairs in the New York City club the Village Vanguard. Bill Evans, with the gifted duo of bassist Scott LaFaro and drummer Paul Motian, made history by re-shaping the possibility of the jazz piano trio. Up until this group, piano trios had followed a pretty standard model in which the bass and drums supported the piano. This trio expanded that commonplace into a three-way dialogue that merged rhythm, melody, harmony, lead and comp simultaneously into a flowing canvas of sound. When you listen to this music your concentration drifts seamlessly from instrument to instrument; you feel part of the experience because the complexity in the playing translates flawlessly to a gorgeous listening experience.

The group played five sets—two and a half hours of music over the course of an afternoon and evening. The music was originally released by Riverside as two separate albums—Sunday at the Village Vanguard

and later Waltz for Debby

. These two albums were eventually blended together on a remastered CD in the 'eighties; however several cuts were deleted in order to make them fit on one CD. Now that has changed with this three-CD box set, The Complete Village Vanguard Recordings, that documents everything recorded on that day. In addition to being a complete document of the day's playing it is a stunning work in the artistry of re-mastering; the playing and imaging rings clear and precise, you are brought closer than before to the playing experience, you feel the depth of the room where a cheerful, chatty, glass-clinking audience sits only a few feet away from the stage. Also included are the moments when the band talked, bantering between themselves about what to play next and holding brief discussions with producer Orrin Keepnews about whether a particular take was a "keeper."

Another aspect of the reverential stature of this album is that it was recorded only ten days before bassist Scott LaFaro's death in a car accident. LaFaro was a brash, aggressive player. He didn't sit back and plod away shyly; he pushed the common perception of the bass and found new ways to make the instrument sing. He was only 25 years old and had been playing for less than five years, but he was being called his generation's innovator, on par with what Charles Mingus's playing brought to be-bop a generation before. Orrin Keepnews' reflections in the liner notes suggest that LaFaro was also growing weary of Bill Evans' life challenges. Albeit a virtuoso player and genius composer, Evans suffered terribly from an inferiority complex about his abilities as a pianist; nothing seemed ever quite good enough. He drowned his frustrations in a consuming heroin addiction. Both LaFaro and drummer Paul Motian wanted more live gigs and recording opportunities than the reticent Evans was willing (or able) to make happen—in fact, the reason this recording was made was because the chances were so few and far between to capture this group. Regardless of whether there was a growing tension in the band or not, LaFaro's death crushed Evans. Paul Motian said in the liner notes that he was forced to begin playing with others because Evans became so distraught and reclusive with grief.

Tragic loss forever cut this trio's time together, but it has no affect on this special recorded moment. The Complete Village Vanguard Recordings will remain both a legendary and marvelous reflection of these three players. I know for me, the three CD set represents the vital essence of this group. If it's too much of a leap for you I suggest getting either or both Sunday at the Village Vanguard or Waltz With Debby to experience a part of this moment. However, this package is priced nicely considering the quality and care put into the re-mastering.

Adam Gopnik, in his terrific 2001 New Yorker magazine article about the 40th anniversary of this recording, wrote the following about what the bigger picture of this album means to him:

"It is art that puts a time in place. Art is the part of culture that depends most entirely on time, on knowing exactly when. The emotions it summons belong to the room they were made in, and the city outside the room when they were made. Not a timeless experience of a general emotion but a permanent experience of a particular moment—that is what we want from jazz records and Italian landscapes alike. The gift this record gives us is a reminder that the big sludgy river of time exists first as moments. It gives us back our afternoons."