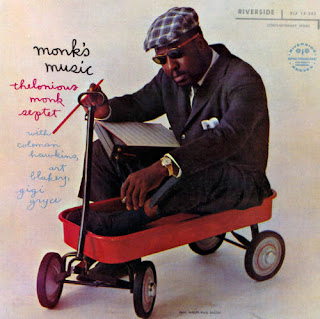 Bob Burnett: Monk’s Music was recorded in June 1957, placing it among post-be-bop, pre-'60s "new thing" explorations. 1957 marked an important point in the career of Thelonious Monk and this album became his breakout. For most of the '50s he was known as a sideman, playing as support on live gigs and making recording dates mostly for other musician's albums. Granted, he was a cog in the well-oiled machinery of be-bop; however, he was also considered an out-of- the-ordinary eccentric. He wore a wide range of hats on gigs—ranging from poofy fur ones to bean-picking straw; he frequently would play a solo with feet bouncing about the whole time, moves that sometimes led to full-scale dances around the piano while the rest of the band played on.

One fabled story had him playing one moment, the next hopping up and dancing offstage into the kitchen of the club where he immediately fell into conversation with a busboy busy washing dishes, eventually returning to the stage to wrap out the song.

So—sitting him in a red wagon in hepcat crocodile-smile shades was probably seen as, "yeah...okay...that works" by the powers that be at Riverside Records. The album’s design was created by Paul Bacon, considered to be at the forefront of innovative graphic design and illustration in that era. Paul Bacon’s magic touch redefined and upped the ante of design for both album cover art as well as bestseller book jackets. In addition to creating many famous LP covers specifically for Riverside and Blue Note in the 1950s, he later masterminded the vivid, colorful designs seen on the book covers for Catch-22

, and One Flew Over the Cuckoo's Nest

. [Ed. note: the current covers of the latter two books aren't the originals.] Bacon’s genius to me was his ability to tap into Monk’s personality, be it on this album's design or others such as Brilliant Corners

. Part of the reason Bacon was so adept at making the covers resonate with the artist’s persona was that he was a huge jazz fan. In addition to being one of the swinging-est comb and kazoo players around (Bacon played onstage at Carnegie Hall in 1976 as part of “The World of Jelly Roll Morton” program, and in his 80s was still a regular with Stanley's Washboard Kings), he was friends with the artists. Riverside producer Orrin Keepnews brought Bacon along on the meeting with Monk when he signed him to Riverside. Bacon had given Monk great advice in the past and had helped him financially when the chips were down (most likely during Monk’s fabled cabaret card suspension).

The music on Monk’s Music is as ecstatic and playful as being pulled in a red wagon. Aside from starting the album with a short, reverent burst of the spiritual "Abide with Me," it's all Monk compositions, played by a septet that not only represents quite a span in jazz history but is hospitable to his music and his jagged, jumpy playing. Trumpeter Ray Copeland and alto saxophonist Gigi Gryce are solid and supporting throughout. Art Blakey is a churning, burning force on drums; it’s always sounded to me like his on-edge metronome-like high-hat makes you expect the entire drum set to blow apart at any moment. His solos are unlike any I’ve ever heard: pulsing, loud, creative and colorful.

The two tenor saxophonists mark an amazing moment in jazz. There’s the young John Coltrane, part of Monk's working quartet at the time, just on the edge of breaking out to become "John Coltrane." (Due to his unknown-at-the-time status he’s not listed on the front cover with Gigi Gryce, Art Blakey and the era’s known tenor guy, Coleman Hawkins.)

My favorite moment among many occurs on the second cut on the album, "Well You Needn't." After an opening head arrangement Monk goes into a solo, weaves, cuts, and chops away as only Monk could do. Suddenly you hear him mid solo shout out “Coltrane! Coltrane!” Blakey gives a rolling transition and the obviously surprised John Coltrane does a quick “Hey! I’m on,” finds his footing, and takes off on his own solo.

Listening to Coltrane and Coleman Hawkins together is a short history lesson in understanding how their distinctive styles illustrate what had been and what is to come in jazz. Maybe it’s because Coltrane was at that time part of Monk’s regular group but he sounds much more at home with Monk, while Hawkins, albeit his usual virtuoso self, sounds guarded and somewhat safe within the context of the septet. Given that, Hawkins’s playing on "Ruby, My Dear," has been hailed as a landmark moment in his recorded history. 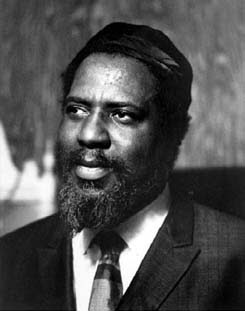 This is an album to have. It is pure listening pleasure. Hitch your own wagon to this one and come along for a boppin' ride.


Mike Johnston: "Abide With Me" is actually a composed hymn, and it's supposedly the reason for the album's title—it was written by William Henry Monk, the English editor of the 19th-century super-best-seller Hymns Ancient and Modern. As far as I can find out, there's no other connection between William H. and Thelonious apart from their ilk, but apparently Thelonious dug what connection there was. According to Wikipedia, T.M.'s first gig was playing church organ for an evangelist as a teenager, so maybe that's where he picked up the "other" Monk's hymn. 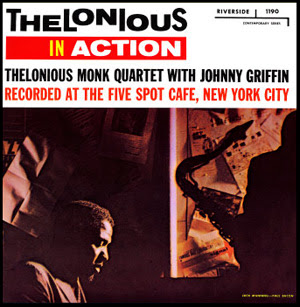 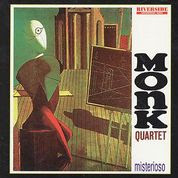 While we're still on the subject of Monk, I want to add my own top nomination for the desert-island CD case (sorry if I'm overusing this hackneyed trope, but hey, it's a blog). It seems pertinent to mention this matched pair, consisting of Thelonious in Action and Misterioso, not only because Bob brought up Monk's Music, but because of his review ten days ago of Bill Evans' Complete Village Vanguard Recordings. As Bob said, that was originally presented to the public on two seemingly separate records, Sunday Night at the Village Vanguard and Waltz for Debbie, although they were recorded on the same June night in NYC in 1961. Well, same deal with Thelonious in Action and Misterioso, two separate records recorded at the Five Spot Cafe on the same night: August 1, 1958 (Action comes first, and Misterioso adds six more tunes).

You could talk about music like this for the rest of your life, never mind all night, so these words are naught but a sketch of a skeleton. But two points. Yes, this is live recording, and you may have feelings about that—I like live recordings better, with jazz, personally—but, if you can somehow find the 20-bit remastered versions, this is simply among the best sound quality Monk ever got. Okay, the separation is 1950s blatant, and Monk's piano wanders a bit in the stereo spread (but how apppropriate is that for Monk?). Still, the sound is full, rich, and deep, with loads of atmosphere and tactility to the instrumental timbres. This oughta be the audiophool's favorite Monk, sez me. Head and shoulders above the disappointing sound quality of Monk's Music (sorry, I'm blaspheming). A less scandalous comparison: Jazz at the Pawnshop ain't got nuthin' on these for hi-fi, babies.

Second, strange though this may be to say, given all the great personnel Monk recorded with over the years, but I think this is his very best quartet. He's paired with Johnny Griffin on tenor, with Ahmed Abdul-Malik on bass and the great Roy Haynes on drums. I can't help thinking, each time I hear these, that all four of these guys are at their very peak on these two records. And although I don't know of any bad Monk, per se, that includes Monk.

A digression while I make an admission: I've never connected all that well with Coltrane. Music—like beauty, sexual attraction, or artistic taste—is at least partly a matter of chemistry, and I just don't have very good chemistry for Coltrane. You might want to take that into account. But great though Coltrane is with Monk, I always get the impression of the two of them side by side—Monk here, Coltrane here. Monk plus Coltrane. With Johnny Griffin, man, it's like a fast-growing vine wrapping itself around the stiff angular branches of a tree; from the opening unison of "Light Blue" all the way to the perfectly coordinated back-and-forth at the outset of "Misterioso," these guys are like two voices in the same body—it's like they're two aspects of one instrument. Talk about sympatico. And this to me is soaring sax. You could call these the best-ever Johnny Griffin albums, and who could argue? Along with this perfect rhythm section, I just don't know how you beat that.

This pair—Monk's Five Spot records—are just inexhaustible. I could listen to them for the rest of my life. In fact, I think I will.
Posted by Mike Johnston at 4:12 PM