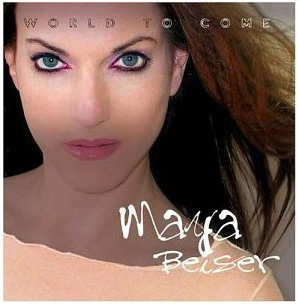 Bob Burnett: In her earlier career as cellist in Bang On A Can All-Stars, cellist Maya Beiser was part of a group that captivated audiences worldwide with their virtuosity, eclectic repertoire, and relentless quest to redefine contemporary music. Bang On A Can All-Stars gained a lot of respect from me for their warm and flowing version of Brian Eno’s ambient masterwork Music For Airports

. They are also responsible for one of my favorite renditions of Terry Riley’s noted work In C.

Beiser has moved on to a solo career—literally. World to Come is a solo cello excursion that expands the already beautiful sound of a cello into a multi-layered sound device creating colorful variations in tone, duration and timbre that combine seamlessly to make for haunting and beautiful sound montages.

Maya had an interesting life as a child. She grew up on a kibbutz in the foothills of the Galilee Mountains in Israel, her family was part of a progressive Jewish community that lived peacefully with the neighboring Muslim and Christian Arab villages. The bringing together of these diverse communities naturally brought many forms of Middle Eastern music into her life: she heard her neighbors' celebrations and holidays as well as the stark echoes from minarets as the Muezzin called the faithful for prayers.

World to Come only builds on the musical diversity she experienced as a child—the album features compositions by Osvaldo Golijov (Argentina), David Lang (USA), Arvo Part (Estonia) and John Teverner (England). The range of compositional styles is also dramatically diverse but with an overall result that is remarkably connected as a contemplative, atmospheric work.

At first I was skeptical of the multi-layering approach Beiser uses. I thought of Bill Evans’ album Conversations With Myself where he overdubbed three tracks of piano. It’s still Bill Evans…but…I’m happier to hear him really solo. In Beiser's case I must say I’m very pleased because she uses the layers to her advantage by creating a wide range of tones; at times it becomes what almost sounds like distant human voices. The centerpiece on this album is Arvo Part’s composition "Fratres (For 4 Cellos)." It taps into Part’s rich liturgical legacy; weaves slowly and elegantly with controlled pacing that makes for an imaginative listening experience similar for me to dudek player Djivan Gasparyan’s album I Will Not Be Sad In This World

. I also connect with John Tavener’s ghostly “Lament To Phaedra,” a starkly beautiful composition in the hands of Beiser. 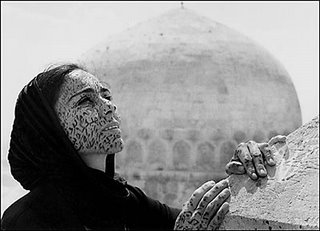 Shirin Neshat
I read that Beiser has raised the art of live cello performances to what have been called "solo multimedia dreamscapes." Her live, overlapping playing is the soundtrack for a multi-media presentation that also features projected film images by Iranian-born/New York City based filmmaker Shirin Neshat. Never having been in an audience for their performances I can only imagine how amazing an experience Beiser’s and Neshat’s work together must be. Neshat creates vivid film imagery primarily for museum installations—I’ve seen some of her work that focuses on her past reflections growing up as a young woman in a less-than-pleasant Iran.

So there you have it—one review, one solo instrument; a world of connections.