David Behrman: On the Other Ocean 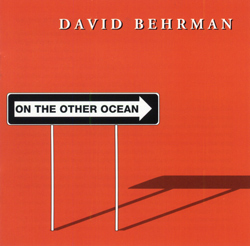 Bob Burnett: It was 1977 at Mills College’s Center for Contemporary Music and something magical happened that forever impacted music. I’ll let composer/teacher David Behrman take it from here:

We were almost young and living in California where the sun was usually shining, the Vietnam War had ended, the scourges of the Eighties were undreamed of, and a new device called the "microcomputer" was in the hands of some extremely intelligent graduate students. The students were trying to figure out whether this new device might contribute something interesting to music, and I was studying with them (although the college catalog claimed that I was their teacher).

What came out of their “figuring out” were two very early compositions that used microcomputers as “players” in tandem with other human “players”: or what came to be known as “interactivity” between machines and people.

“Figures in a Clearing” became the first recorded piece of David Behrman’s to use a microcomputer for music. The computer was named “Kim-1”—a crude predecessor to the Apple IIe—and ran a program that varied the time intervals between chord changes. The time intervals were modeled on the motion of a satellite in falling elliptical orbit around a planet. Cellist David Gibson was given a “score” which was a list of six pitches. His only instruction, beyond being limited to the six pitches, was not to speed up his playing when the computer-controlled rhythm did.

The other side of the album was called “On the Other Ocean.” Created a few weeks later, it featured fellow Mills teacher Maggi Payne (flute) and student Arthur Stidfole (bassoon) in a duet improvisation based on another select group of pitches. This time, Kim-1 was set-up to sense the order and timing in which the six pitches are played and to react by sending harmony-changing messages to two handmade synthesizers.

When we went into the Mills recording studio that sunny September afternoon with the breeze blowing through the Golden Gate, we had had no previous rehearsal. Maggi Payne and Arthur Stidfole had never performed together; the simple software (typed laboriously by hand in machine language into the tiny hexadecimal keypad of the "Kim-1" microcomputer) had just been completed. I had no idea what would happen.

What happened was the second of two strikingly gorgeous compositions that each in their own way were complex yet meditative ambient works before anyone knew to call them ambient. They brought together the warmth and mystery of improvised playing with the coloring of computer-generated sound shifts. “On the Other Ocean” is a particularly fascinating listen to me because it maintains an overall calmness in the midst of occasional, seemingly random pitch shifts and overlays from the computer effects.

I look at this recording as well as other pioneering works in electro-acoustic environments on the Lovely Music label as vital influences for what electronic-based music and digital instrumentation evolved into and is today. To me, actively listening to the Lovely Music catalog (artists such as Robert Ashley, Jon Hassell, Alvin Lucier, Tom Johnson) is (to paraphrase the thoughts of Paul Morley in his incredible and essential read Words and Music: A History of Pop in the Shape of a City) the “completion of the musical circuit.”

Morley continues:”I did not create the work but I feel by hearing the pieces and by responding to it with my own thoughts I am helping to finish them off. I am the final element in the making of something great called music. The music has become useful because of my own perception of what music is, and why it exists.”