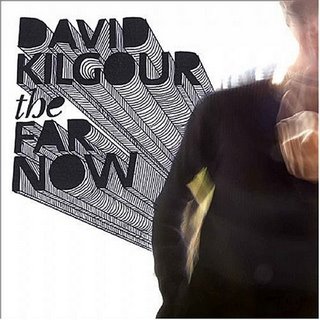 Kim Kirkpatrick: David Kilgour is my kind of musician, one who keeps plugging away year after year, always open to new ideas and directions. Kilgour was in a seminal rock/pop group from New Zealand, The Clean, formed in 1978. The Clean produced the first release for Flying Nun Records, an incredibly influential underground label out of New Zealand. This label and many of its bands, such as The Clean, Able Tasmans, JPS Experience, Gordons, The Chills, and The Bats, revived my interest in rock and pop music some twenty years ago. The Clean was a trio of David, his brother Hamish, and Robert Scott (who later formed The Bats). The Clean have reformed on and off but initially split up because their relative success was wearing on the members.

David Kilgour has continued making music with various lineups. He has released six solo recordings, the last three on Merge Records (formed by two Superchunk members) based in Durham, North Carolina. The Far Now was released in 2007, with half of it being solo home recordings, and the other half with his band, The Heavy 8s. With the band, Kilgour chose to record on the fly, not always letting the band know where the song was headed, or even telling them this was a serious recording session. This relaxed, live feeling is palpable; it feels friendly and intimate. All of these characteristics are common qualities for David Kilgour—another reason I have been drawn to his work for over two decades.

The Far Now is comfortable and easygoing, but it is also dense and carefully layered. You'll hear new elements every time you play it. Kilgour is known for being a fine guitar player, and these skills—his tasty style—is all over this CD. It has a serpentine, cavernous, 'sixties quality to many of the songs, most audible on the final track, “Out of the Moment.” Kilgour commented (for Merge Records) on the end result of The Far Now differing from his initial expectations:

"I thought at one point that this one would be a lysergic guitar heavy extravaganza. It’s actually ended up being quite mellow and reflective. The songs sprung into my lap and pretty much decided how they wanted to sound, and I followed their direction."

He attributes much of the sound and feeling to a Gibson acoustic guitar he had recently purchased and it certainly is prevalent throughout the CD—generally up front, forming the rhythm bed for the songs. The Far Now is filled out by lots of synth sounds, slide guitar, multiple electric guitar tones, organ, various stringed instruments, and a beautiful, intricate mixing and production.

David Kilgour is worthy of your exploration, and The Far Now is an excellent, solid release. Kilgour is always looking for a new musical path, and I’d say he is clearly led by a kind and steady muse. He is already at work on the next recording, one he hopes to make “guitar heavy.” I would suggest you get to know his music now, catch up a bit, so you are prepared for the next David Kilgour release. The Far Now, Frozen Orange, and A Feather In The Engine are all recent solo releases on Merge Records. The Merge Records site also has a downloadable David Kilgour digital retrospective, The Before Now. And finally they released a fine double CD anthology of The Clean

to buy this recording if you're in the U.K.

Bob Burnett: I bought this based on Kim's suggestion—and have listened to it repeatedly over the past few days. I love it—really. It feels like an album of songs that were purposefully kept basic, simple, and that remained liked by the band. I'm sure in many instances players hate the songs by the end of a recording due to repeated, un-needed takes and cutesy sonic additions. (I believe the medical term is "Maxwell's silver hammer syndrome"...I might be wrong.) This album feels like the songs are cared for and crafted but not fussed-over. Don't confuse that with sloppiness; these songs are special and meaningful. They dig in deeply and emotionally and carry a wonderfully vital warmth.
Posted by Mike Johnston at 4:07 PM