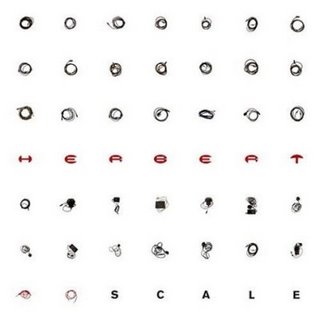 Bob Burnett: Matthew Herbert is a floating collage. A classical-piano-trained musician, a bon vivant musical concrete mixer, a sound-blipping dance music designer and a wonderfully inspired string arranger. You roll together all of Herbert’s skills, add his musical and life partner Dani Siciliano's vocals and you get a brilliant and entertaining album called Scale.

As a music creator Herbert reminds me of Gene Wilder’s depiction of Willie Wonka. You never see him doing anything particularly amazing himself beyond a wink, lever pull or bubble launch but, all around him, there seems to be magic happening. Scale takes you on your own magical musical candy ride—although without any scary tunnel parts or a portly kid's departure squeezedup a chocolate tube. I wish radio stations played albums like this one but they never seem to—music that is real, honest, hooky, danceable, pulsating and clever that would sound so wonderfully high octane while being sonically spewed through those tinny, tiny gas-station-pump speakers. I hear many things percolating and intermingling in thoughtful, stimulating ways. Recently I was listening to Scale on my iPod while riding on a crowded subway. It made a wonderful soundtrack to the natural choreography occurring as I glanced around watching people blink, shuffle their shoulders, shift their hair, and change facial expressions from one form of boredom to another as they endured the train ride home.

Scale includes a ton of found sound, and sound recordings as effective colors. He plays coffins, kitchen sinks, punching bags and various machinery. The liner notes mention 635 separate sound-making items used in the album's creation; and many are included as images—49 per page—in the album packaging.

OK, I’ll stop for a second, let you take a breath and possibly make some sighing sound effect of your own. Thinking it sounds like an overly-effected gimmick recording, huh? Or something oddly reminiscent of earlier sound experimenters Godley and Creme? Well, no, not at all. All this rampant, disembodied sampling gels beautifully within nicely structured songs—and I can’t say enough about the creative Herbert-composed string arrangements. Think Van Dyke Parks’ impact on Joanna Newsom’s Ys, think lush groove of Marvin Gaye in the ’60s or Nelson Riddle's elegant churning to Frank Sinatra's behind-the-beat phrasing, record it nicely at Abbey Road Studios and you get the sumptuous nod so essential to this music.

So by bringing together Scale's cluttered whimsy, samples, strings, spontaneity and charm, you ultimately get something that on the whole works as a cohesive pop album that you’ll want to listen to all the way through—a rare offering these days.