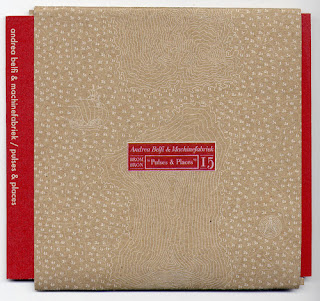 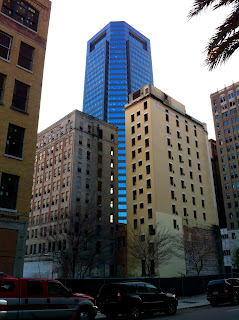 Bob Burnett:  Work this week took me to Jacksonville, Florida.  I had the opportunity to take a few long walks (with headphones) in the evening through the downtown.  Like many places in the USA, Jacksonville has a nice assortment of historic buildings that over time have been accentuated with rampant mediocrity: lifeless towers, formless streets and highway overpasses and ramps that split up connectivity.  There are many vacant buildings that seem to have been gutted in hopes of future rebirth or perhaps were the start of rebirth and the financing collapsed leaving nothing but a shell. 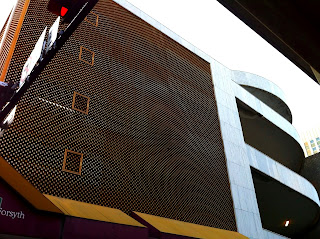 I came across a few odds and end retail spots and restaurants that seemed to offer some sense of possibility among all the emptiness.  No doubt there's community pride and hope for a thriving sense of place.  Unfortunately, it seems to be a stalled work in progress.


Drifting somewhere between gentle drone-based ambient and modern psychedelia/postrock, the four pieces of "Pulses and Places" consists of waving organ sounds, chilling guitar drones with downbeat hand percussions. The expression of the overall album sounds like a mixture between early Pink Floyd as they sounded in their most trippy psychedelic moments and 80's rock/pop-giants Talk Talk in their more experimental postrock-based period around the "Spirit of Eden"-album (1990).

A striking collaboration took place between Belfi on drums and assorted small percussion and Zuydervelt on guitar and organ. Together they produce the 'pulses' and 'places' mentioned in the title. Organic yet partially improvised, it resembles a kind of sonic geography. The listener is taken away for a journey of mild drones, soft yet outspoken percussion. 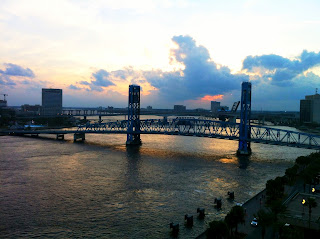 As Pulses and Places continued, my personal sonic geography walk carried me from downtown to the waterfront of the St.Johns River.  There's a place called Jacksonville Landing that attempts to be a tourist destination.  As with downtown, you can sense there was effort and great hope at one time for the Landing to be a cornerstone/destination for tourists and visitors.  Unfortunately, it's flat.  It houses a few sports bar-type places and an array of odds and ends tourist trap shops that feature Chinese-made Florida Gator throwaways.  The tourist presence I saw were a smattering of '70s feathered-hair folks (one in a Rod Stewart concert tee shirt) having one last cigarette before going to Hooters.

After the Landing, Pulses and Places landed too.  I found myself back at my hotel glad to have experienced both the music and the visuals.
Posted by Bob Burnett at 11:51 AM