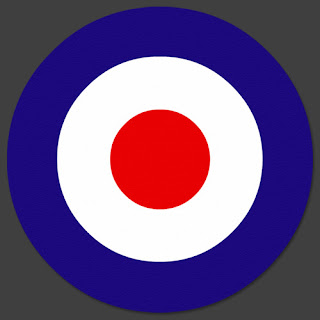 Kim Kirkpatrick: In lieu of The Who's 12 minute mash up appearance at the Superbowl, and the fact "My Generation" has been stuck in my head for three days now, I thought I'd share my recollection of seeing The Who for the first time on May 25th,1969. I was sixteen when I drove around the beltway to Merriweather Post Pavilion in Columbia Maryland*. I was excited to have seats perfectly located, in the center and level with the performers on stage. From the start I was locked in on the performance, it was captivating seeing and hearing Tommy played straight through in it's entirety. Having been released just two days earlier, I had heard it once prior to this concert. Tommy was soon to be declared the first rock opera, and said to have set a new standard for Rock music. The Who also performed another whole set of now classic songs from their past releases, though I can't say I remember them individually anymore. 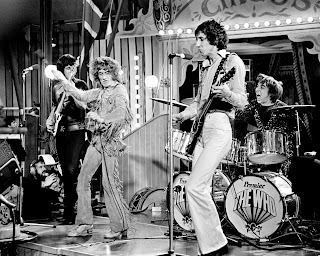 The band presented as electric and intense a performance as I'd ever seen. Pete Townshend's guitar playing was full of expressive energy, felt as much as heard. His arm-swing motions across his guitar were violent strikes, dramatically on target, and a visual timing device for his bursting, exploding guitar chords, as well as just plain cool. At some point he was bleeding from these sweeping actions, a common occurrence for him it turns out. (Their are accounts of him ripping fingernails off, blood flying throughout the rest of the painful performance. Once he impaled his hand on the whammy bar of his guitar, roadies taped it up and he continued to perform). His playing was an attempt to break through boundaries on a personal and musical level, and a shot across the bow of society. He persistently pushed for something new through his use of volume, dynamics, and ringing open chords. Yet with all the power his playing projected it was also precise, defined, and dead on target. His playing served the music, the story telling qualities of his songs, and though he was the leader, the songwriter, he never stepped on his bandmates performances. Unlike say, Eric Clapton, Jimmy Page, or Jeff Beck, Townshend never stepped up for a flashy solo, and there was never a touch of "look at me" in his playing.
Clad in a suede, fringed vest, bare chested, swinging his microphone in a huge windmill fashion, Roger Daltry was bold, dramatic, and up to the task of stepping in front of the massive, powerful sound that was The Who. He also had one of the better, more versatile voices of rock at the time. John Entwistle's bass playing was not merely about keeping time, it was a counterpoint and a push to Townshend's playing. Keith Moon, the relentless, volatile, blast furnace of a drummer, was battling the songs while keeping precisely on the beat. The Who ended the evening with the destruction of their equipment, at the time it felt like freedom, a denial of possessions, indicating the performance was the point and now it was gone forever. Finally amidst all the scattered drum parts, smoke, and feedback,Townshend stepped to the front of the stage and threw his guitar into the audience. It landed right next to me, everything stopped for a moment, and then the person with the guitar on his lap disappeared underneath the attacking audience. 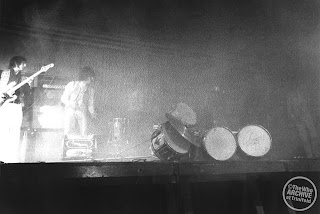 Amazingly, eight years later, while working in a record store I struck up a conversation with a Who fanatic while we stood in front of a rack of bootleg vinyl. Turned out he was at the show, he also happen to have taken that guitar home with him.
The opening band that night set the bar incredibly high for The Who, I remember commenting that The Who could never top that performance (though they did in my mind). Led Zeppelin was the opening act, on their first U.S. tour supporting their first album released in January of 1969. I later learned that night was the only time led Zeppelin ever shared the bill with The Who.
*
Merriweather Post Pavilion was built in Symphony Woods, on a forty acre wooded lot. it was part of the planned community of Columbia Maryland and a facility intended to be the summer home of the National Symphony Orchestra. The structure opened in 1967 and was designed by architect Frank Gehry.

"Once you're old enough to have a medley," Roger Daltrey confides with a perceptibly uneasy laugh, "you know you've 'ad it."

from interview by Matt Resnicoff for guitar player September 1989
Posted by Kim Kirkpatrick at 8:46 AM