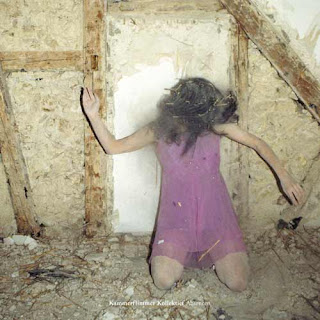 Bob Burnett: I figured it was time to try a new approach--write about a group's previous release (Absencen-2005) in anticipation of hearing their new release. (Jinx--just released in late May 2007) Kammerflimmer Kollektief have put out seven albums to this point. (including a re-mix project from last year) Their work brings together an interesting mix of jazz, electronica, film scores and improvisation. "Kammerflimmer Kollectief" translates in English to "shimmering collective" and that name fits them well. Their sound has a float to it--at times featuring harmonium and vibraphone, other times violin and keyboard drones and layers augmented with Evan Parker-like circular breathing "out" saxophone sounds intermingled with pedal steel guitar and bass.

The mainstay of the group is multi-instrumentalist Thomas Weber, credited on Absencen as the creator of the drones and songs, who started the Kollektief in the late '90s as a one man band who at that time focused more on ambient soundscapes inspired by his record collection. On this album they expanded upwards to five members including Heike Aumuller (harmonium), Johannes Frisch (bass), D. Wurm (sax) and Trapist's Martin Siewert on pedal steel. Helmut Dinkel, Marco Preitschopf, and Pirmin Ullrich are also credited as participants. The group creates a cohesive sound given the unusual array of instrumentation. In addition to the previously mentioned Evan Parker-like moments, I'm reminded of inspired ECM label albums by people like Charles Lloyd, Jan Garbarek and Terje Rypdal. The working basis of Absencen is to take Weber's initial structure of a composition and improvise on top of it. German writer Markus Hablizel succinctly summed up Absencen in this very German language translated to English way:

"Absencen is a tapestry woven from many and diverse translucent threads. The side that we behold is shimmering in a holy manifoldness, while from beholding it we can anticipate and construct the averted side. After all, we are not only endowed with the ability to hear, but also to think."

I enjoy Kammerflimmer Kollektief in many ways--they are inventive, spontaneous and tight. Although a group rooted in electronic drones they sound very live and natural. They create elegant and curious spaces and weave together a variety of textures. They also risk it all by approaching free improvisation but use keen restraint to keep the tempest in the teapot from boiling over completely. 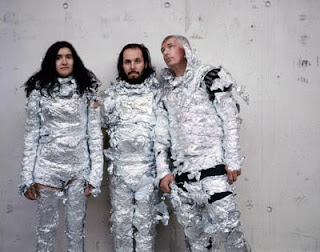 The current trio in a baked potato homage moment.
I look forward to hearing how their new album Jinx works--I'll add onto to this review when I can offer something more. They've approached it as a trio this time so no doubt something different will be out there for us to hear.
Posted by Bob Burnett at 5:40 AM