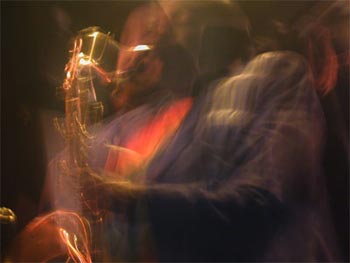 Note: Not the cover of "Home" but, hey.....why not.
Bob Burnett: I frequently think back to New York City's Sweet Basil night club 25 years ago.

It was a jazz club just up the street from the Village Vanguard in Greenwich Village. One night I went with two friends, Brad and John, to see David Murray's Octet play. I knew of David Murray at that point from his work on Jack DeJohnette's phenomenal 1980 ECM album Special Edition so I was excited to see what he offered as a bandleader. Well, that night was one that I'll never forget. That group was made up of some of the generation's greatest players, such as Steve McCall, Fred Hopkins and Henry Threadgill. And out front was David Murray, playing tenor saxophone and bass clarinet, launching into extended solos, his shoulders bouncing and shuttering, bending at the the waist, eyes rolling up into his head as he pushed the upper registers. A powerful example of the magic of live music. One composition in particular stuck with me, "Last of the Hipmen", with its beautiful melody line, solos and nod to the past players who influenced and pushed Murray's own playing.

I recall all this nostalgic live reflection as a way to praise what's just happened on emusic.com. They've re-issued a bunch of Murray's work from the years when he was putting out albums on the Black Saint label. There are many wonderful albums to choose from and I suggest you dip into the selections. For this write-up I'll somewhat focus on Home, a recording by the David Murray Octet, which features the studio version of "Last of the Hipmen".

The Octet always seemed to me like a natural fit for Murray. His big band recordings always had a hint of chaos whereas the octet environment seemed to offer a better opportunity to explore the nuance the compositions offered the group.

It's hard to imagine that Murray was leading this cutting edge group as a young man in his twenties during the early '80s however by that point he was wise beyond his years. He came to New York in the mid seventies where he caught the ear of critic Stanley Crouch (in a time when he still wrote glowingly of free playing) where the two of them created a loft space called Studio Infinity where Murray frequently played open music in a trio with the likes of a rotation of players including Mark Dresser, Steve Mc Call, Fred Hopkins and Phillip Wilson.

In 1976 he became a founding member of the fabled World Saxophone Quartet along with Hamiett Bluiett, Oliver Lake and Julius Hemphill. Joseph Papp, famous as founder of the Public Theater, commissioned Murray to form a big band--which led to the octet format heard on "Home".

Nothing on album quite captures the intensity of the octet as experienced live, however "Home" is a great example of the variety of compositional directions Murray was pursuing at that time. He's occasionally called the natural progression of Eric Dolphy--I suppose because both are know mostly for tenor sax and bass clarinet. I can see that to some degree in the fact that he pursues a wide canvas of directions--a touch of open-ended improvisational playing as well as a smattering of traditional composition and head arrangements. As mentioned earlier, one of his shining moments to me is "Last of the Hipmen", an homage to those "classy cats" of be-bop.

David Murray went on from Home to record a wide array of albums--he even is known to cover Grateful Dead songs as well as push the envelope later in the '80s with James "Blood" Ulmer.

I enthusiastically support checking out Home as well as using your emusic downloads to explore David Murray's Black Saint, DIW and India Navigation releases--they are richly rewarding.
Posted by Bob Burnett at 6:53 AM