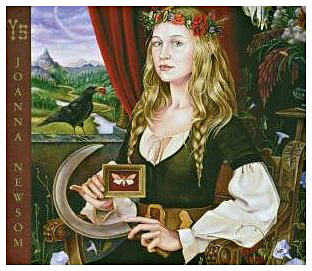 • Buy in Japan
Bob Burnett: After reading about Joanna Newsom and Ys as the cover feature in The Wire magazine I decided to try, knowing I was treading into an area that usually makes me run fast the other way. Granted, her voice is very unique and I give her credit for the overall scope of the work at hand; engaging string arrangements plus her virtuoso harp playing and obviously deep appreciation of literature in creating lyrical playgrounds. But...there is that annoying shrill squeak that pops up at the top of her breaths that hits me like the blip of a smoke alarm letting you know the battery needs replacing. The passive-aggressive polite review line would be “would have been an interesting instrumental album” but that just would be selling it short. Okay—so I just sort of panned it. Maybe I needed to commit to panning it and then try again.

Mike Johnston: Well, I like it. Critics' darling—don't care. Odd voice—voices are a chemistry thing, I think. We like or hate voices in about the same way we respond to the attractiveness of individuals of the gender we're attracted to. Some people sound like home, some drive you wild (in a good way), some you hate in an instant, and most people are in between. Same with voices. I mean, lookit Neil and Bobby Z. Both sound like home to me, but there are legions of people who are forever banished by their aversion to their voices (poor lost souls). I can see how some people would hate Joanna Newsom's voice. Squeaky, freaky, odd. Personally I like it, though, and to me it fits in fine with what she's trying to do here.

Bob Burnett: As is sometimes the case when I throw some decisive statement out like I did about Joanna Newsom and Ys, I want to re-visit to either confirm my feelings or to just tap into if I'm being premature in making a bold statement. With a little more patience and brevity I continue to find her voice and phrasing to be a huge challenge. I have grown a bit in my respect for what she does with writing, harp playing, having Van Dyke Parks arrange strings, etc. However the whole approach is way too dense. It seems the writing is a series of metaphor-based attempts at harkening back to a forgotten time of poetry influencing the emotion; visual sparks, non-sequiters, deep views at small happenings that become centrally important because the writer says so. Also while listening I start imagining clever people needing this album as a crutch in coffeeshop conversations to pensively glance out the window, sip a cup and offer their own little reflections on Anna Livia Plurabelle while nodding and saying, "You know what I mean, right?" to rekindle their own expansive complexity.

Critics are falling over each other calling it hugely important and one of the best of 2006. I understand why they would do that because no one in wordsmith criticland wants to be the dullard who doesn't “get it." With all this tzuris I have concluded she is sincere in what she is doing so that allows for a bit more leniency in my damning of her work. Maybe I'm just letting her take the heat for my childish need to be contrary to something so many people are finding special qualities in.

Now I'm going to listen to it some more, drink coffee, glance out the window and think about washer women turning into trees by the river. You know what I mean, right?

Mike Johnston: Right. I have to say that I tend to put this on and just listen. I loved the arrangements, and the lyrics don't bother me because I hear them in snippets, fragments, not as a narrative or an argument. I take in only phrases at a time.

Okay, and bits'n'pieces of melancholy melody stick in my head. Actually, I need to soldier up to liking this more than I'm letting on: I don't think it would have made an interesting instrumental album; I do find the instrumentals charming, but—and remembering that chemistry allows me to accept her voice—I like the singing. I'm convinced by all the Renaissance motifs and allusions. Voice and instrumentals dance together. My attention goes back and forth from one to the other. I will say it certainly is a toweringly odd pop album c. 2006!

I wonder if all those breathless happy critics falling all over this just have never heard any real Renaissance music, so all the borrowed modes she and Van Dyke employ are feeling like a real discovery, and new instead of old. Might be some of that—you know what I mean.

I wonder what Kim thinks.

Kim Kirkpatrick: Has no one referenced Bjork, with the big orchestration, and the similar voice problem or vocal uniqueness, depending on how you react to Newsom’s vocal style? Ys makes few contemporary connections, which is a positive in my opinion. Though it did bring to mind Buffy Sainte-Marie’s Illuminations recording

. This recording (from 1969) also seemed to come out of nowhere, primarily featuring synthesizer and Buffy Sainte-Marie’s unique vocalization. Interestingly, in 1969, she married Jack Nitzsche, a highly influential arrange/composer who participated in a variety of rock recordings at the same time as Ms. Newsom’s collaborator Van Dyke Parks.

I cannot say I like Ys, or that I care for Joanna Newsom’s vocals but I really appreciate her efforts. Bob said she is sincere and I agree this is an authentic artistic expression, one where she lays herself on the line. It is clear she had to make this recording, that harp playing and telling a story is her purpose in life. She and Van Dyke Parks push everything forward, take plenty of risks, and it is a bold, thick presentation. One has to admire the sincerity and exhausting effort put forth by Joanna Newsom to create this recording.

Hey Bob, remember Alan Stivell’s Renaissance of the Celtic Harp? I have not owned it since our vinyl days but I recall a track titled "Ys."

Bob Burnett: Uh huh. I do, now that you've reminded me. No doubt a memory stirred by both of us playing that very song on the radio and while giving the title over the air hoping not to sound like a multi-headed knight in search of shrubberies. I haven't re-visited Stivell since the vinyl days. I did see him live in the early '80s as part of an audience for the taping of a TV show. That was a great experience—I imagine Joanna Newsom would bring the same kind of energy live. Great dig to pull Buffy Sainte-Marie out. Perfect link to Newsom. But then again you speak a language oh so primitive, you make sense to me.

I had forgotten the connection to Jack Nitzsche, who links us to another favorite c60 muse frequently accused of more than his share of warble—Neil Young.

Kim Kirkpatrick: I've figured out the problem for me, after 4–5 more listens on various stereos. Her voice is way up front, and that sounds artificial and out of balance. It's not quite like she is in another room with headphones on, but she's just too "there" in comparison to her harp playing and the arrangements behind her. Reminds me of when Bob and I recently saw Lambchop—Kurt Wagner's voice was mixed way too loud, over the top of all the other musicians. It seemed the antithesis of Lambchop and his normally reserved, got-to-search-for-the-meaning, mumbling brilliance. If Joanna Newsom's voice was back on level with her harp playing I think I could enjoy this release much more. Instead it feels like the words are being stuffed into your ears and made important, and her quirky vocal style is being over-emphasized.
Posted by Mike Johnston at 9:58 AM