Billie Holiday: All or Nothing at All 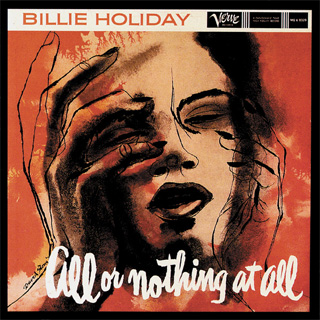 1933–1942 were the so-called "Columbia years," named after her main label during the period. These were the years in which she became famous as a pop chanteuse and was in full voice and flower. On disc, the period is extremely well-served by the currently going- but not gone-out-of-print Columbia "Quintessential" series, volumes 1–9, which contain all of the 153 songs she recorded for Columbia. This was the arc of her ascent, traditionally known as her "good stuff," that made her reputation and was once preferred by the public and record collectors. All nine volumes of the "Quinessential" series are delightful; none is particularly better than the others, and none are bad. Buy one or two, or a handful, or all of them. 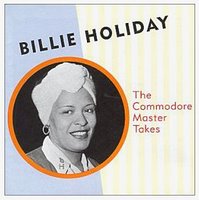 In 1939, mainly because Columbia refused to record the harrowing "Strange Fruit," Billie freelanced for Milt Gabler at Commodore Records, mainly in two sessions, one in 1939 and one in 1944. Although not the best single-disk introduction to Holiday—it's a transitional period musically—the Commodore sessions

are essential for any collector, as this was the formative period of her mature style—and it contains some of her signature tunes, "I Cover the Waterfront," "I'll Be Seeing You," "Embraceable You," and of course the 1939 "Strange Fruit." However, no one but the most fanatic completist needs all the alternate takes that are available, none of which are really very different from the master takes (although I confess to marginally preferring a couple of the alternates). The single disk with just the 16 "master takes" is the one to have.

In 1942-44 she began using heroin and recording for Gabler at Decca. This was probably the happiest period of her professional life, because Decca treated her like the 1940s version of a superstar, getting the best songs for her to sing and pulling out the stops when it came to orchestral accompaniment. Holiday reveled in the treatment she received at Decca and the respect she was accorded. However, although well served on The Complete Decca Recordings

, this period didn't cover much ground and is probably the least essential major Holiday for the modern listener to own. It still belongs in a more complete collection of her best, though.

Although her Decca period didn't wind down until 1950, her career was permanently (and some think fatally) interrupted in 1947 when she was arrested and jailed for the better part of a year on drug charges. Worse, upon her release from prison she was permanently denied a cabaret card, meaning she could no longer perform in establishments that served alcohol—which of course meant most of them. Her drug use, legal problems, money woes, and personal problems escalated and intensified in the late '40s and throughout the '50s until her death, and she became a sort of postwar Michael Jackson, notorious with the public (and getting much more attention from the white press for her troubles than she ever got for her singing) as an aging former star providing a lurid spectacle as she went down in flames.

From a creative standpoint, the best was still yet to come, however. In 1952, Norman Granz signed her to Mercury, parent company of Verve. In the seven years before she died in 1959, she recorded nearly 100 songs for Verve, now known as her late or Verve period. The standard line is that this period is a triumph of experience, judgment, and musical intelligence over declining vocal ability, but the fact is that her work during this time was very uneven. A good number are excruciatingly awful ("unlistenable recordings made when she could barely find the energy to enunciate or keep in tune," writes Gary Giddins). But the best of Billie Holiday's Verve recordings are one of the glories of recorded music. In recent years the reputation of her Columbia period and her Verve period have flip-flopped; most Billie Holiday lovers now admire and prefer the later period over the earlier.

And most, although not all, of the best songs from this period are present on this indispensable Verve compilation, All or Nothing at All. It comprises all of Songs for Distingué Lovers and Body and Soul, plus six or seven more high points plucked from other records of the period. In toto it's a great work of art and both a pleasurable and a moving listening experience, whether dipped into, selected and excerpted, or listened to straight through.

Also, importantly, for me at least, it contains none of the songs from Lady in Satin. The controversial Lady in Satin is really a case study in misguided pop cultural assumptions, and encapsulates down into the present day the misunderstanding that always existed between Billie Holiday and the broader American public. Very unfortunately, Lady in Satin has gotten the reputation as her "best" record, for two reasons. First, Billie herself said at the end of her life that it was her favorite. But to interpret this, you need to consider the context—Billie always considered recording with a full string band to be a mark of respect to her, and the treatment she got while making this record at the very end of her short life must have felt like a return to the treatment she got during her Decca years—it was her last star turn. And second, it's beloved of myopic "audiophiles" as the best sounding Billie Holiday record, due only of the recording of the strings, ignoring her voice, which to me makes about as much aesthetic sense as ranking 9/11 videos for artistic quality—i.e., no sense at all. For this reason, Lady in Satin is often purchased by neophytes as "the best," and their one and only representative Billie Holiday record.

This is just so tragically wrong. Her voice on this record is ragged and hoarse, her range—always limited—even more truncated, making the contrast with the Nelson-Riddlesque Ray Ellis string arrangements almost bizarre in its cognitive dissonance. Personally, I have no objection to the completist owning this record, and no quarrel with the Lady Day aficionado who finds great pathos and meaning in her performances here, as many do. But the ruin of her once sweetly expressive voice is shocking, and as a listening experience the record is a travesty because of the hokey, sappy, horrible strings-all-over-the-place Lawrence Welk soundscape. However jazz fans might feel about it, it should not be anybody's only Billie Holiday record. I don't even own it.

If you love Billie Holiday, or jazz—or, hell, music—make sure all your friends buy All or Nothing at All as their one-and-only Billie Holiday record, and make sure they don't think that having Lady in Satin as their sample disk means that they've got any idea at all what Billie Holiday is all about. It sticks out as the biggest anomaly in her entire extensive catalog.

To round out a great Billie Holiday collection on record, the other essential from the Verve years is the great Lady Sings the Blues, a perfect record and one of the high points of music on record for me. Unfortunately, you can't really buy this on CD right now, because the only available CD versions add songs that weren't on the original album, omit some that were, and change the order of the rest. This is unnecessary vandalism, and you should hold out until you can get the record in its original state. And that is:

With Wynton Kelly on piano, Kenny Burrell on guitar, Aaron Bell on bass, Leonard Browne on drums, Charlie Shavers on trumpet, Paul Quinchette on tenor sax, and Anthony Sciacca on clarinet on the first eight songs, and Bobby Tucker on piano, Barney Kessel on guitar, Red Callender on bass, Chico Hamilton on drums, Willie Smith on alto saxaphone, and Sweets Edison on trumpet on the last four. Having Lady Sings the Blues and All or Nothing at All is a way to neatly possess almost all of the very best, and none of the worst, of late-period Billie Holiday, who was only 44 years old when she left this earth but had lived a very full life as an artist.
Posted by Mike Johnston at 8:14 AM