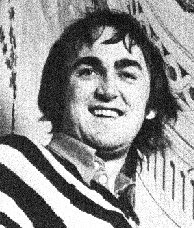 Bob Burnett: Ollie Halsall, the most interesting guitarist you probably never heard, had a birthday on March 14.  Unfortunately, Ollie died due to a heroin overdose in May of 1992 so while he didn't recognize his own birthday several facebook friends posted Ollie Halsall birthday tribute reminders.

Ollie was probably best known for his multi-instrumental work in the faux-Beatles film and soundtrack The Rutles. He was also a member of semi-progressive rock bands Patto, Matchbox and Boxer. (note: old friend Marc just chimed in that Ollie replaced Alan Holdsworth in Tempest when they covered The Beatles' "Paperback Writer")

I was reminded of the Patto song "The Man" this past week (thanks to Brendan Canty) where Ollie shines.  In addition to playing nice guitar, he adds vibes to a great off-rhythm rock song that has a Tortoise-like ring to it.  Patto has it's moments as an early '70s rock album but I can't quite see past lead singer Mike Patto's "rock guy" approach.  It's worth a run-through since the album is available on MOG.I've also popped in a youtube version here.


Ollie's single greatest moment for me was the guitar solo he played on Kevin Ayers' "May I" from the June 1, 1974 album.  The album comes from a live gig that took place at the Rainbow Theater in London.  Featured performers along with Kevin Ayers include John Cale, Nico, Brian Eno, Robert Wyatt, Mike Oldfield and our focus--Ollie Halsall. I probably owned and sold this album 3 or 4 times.  It's very spotty.  I'm pretty certain I was first led to it because of Eno's participation. As mentioned, the Eno focus was deflected by Ollie Halsall's solo.  It floats, always seems on the verge of being just a little off but tightropes it's way elegantly through several hoops and ladders until it lands beautifully allowing Kevin Ayer's to return to his Burgundy-soaked vocals. After hearing this solo I always kept Ollie Halsall's name around in my mind as someone to look for in record shops. It seems he stayed with Ayer's pretty much from 1976 on.  Somewhere in some record company vault there sits a solo album that was produced by Robert Fripp.


I lost track of Ollie and hadn't thought about him for awhile until the birthday greetings popped up.  I looked around and found an archive/tribute webpage to him that offers more information as well as a detailed Ollie's Guitar Techniques page.
Posted by Bob Burnett at 9:47 AM