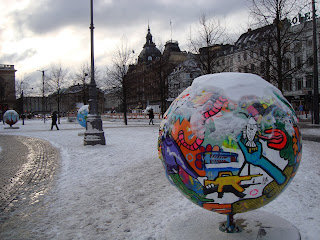 Bob Burnett: It's pitch black at 7:20AM in Copenhagen Airport. Winter in Denmark offers darkness until well into the morning. I'm waiting for a flight while listening to Bob Dylan's Nashville Skyline.

My thoughts go back to 1976. I was a high school kid with little knowledge of anything in particular. I was working in a Long John Silver's; wearing a fake pirate bandanna do-rag while routinely burning my arms making fish and fries. I was a few years into record buying at that point; Led Zeppelin, Jeff Beck, Beatles, Walter Carlos Switched on Bach, Chicago Live at Carnegie Hall box set, George Gershwin are recollections of the floating, spinning vinyl that was happening for me.

But not Bob Dylan. I still needed fermenting on that one.

A year earlier in a class in school a "new girl" who just transferred was sitting behind me. She was probably two years older than my freshman self but seemed an eternity ahead in life experience. The initial awkward small talk led to her asking me "are you into Bob Dylan?" and being a 15 year old I said "uh....no". I really didn't know what she was talking about....Bob Dylan, Bobby Darin...it all seemed confusingly the same. Later I heard her say to another older kid in the class "man you gotta save me in here...I mean he's not even into Dylan..."

Well.....it's not like I wanted to impress her or anything but I gotta say it stung to be considered a drag. You'd think the next line in this story would be I went out, bought Blonde on Blonde and became an angel-headed hipster looking for an angry fix of mystical magic within every line. Nah. A year passed returning us to the Long John Silver's portion of this story. I found myself listening to the radio in the back room while making vats of cole slaw. The assistant manager knew I liked listening to the radio so one day struck up a conversation about how much he liked Bob Dylan. There was that name again. But this time from a guy; a real straight shooter of a guy. An honest, friendly, calm, kind of guy who if he wasn't working at Long John Silver's at that moment would probably be pulling over to give some hitchhiker a ride. He spoke to me about what Dylan meant to him and I could tell it was a very good thing.

As chance would have it, a few days later "Lay Lady Lay" came on the radio during a slow moment and I called for the assistant manager to come back and listen. There he stood; rapt in silence, head slightly cocked and arms crossed, taking the whole thing in. That moment offered me a gift--the chance to absorb his appreciation of the music while being allowed to experience a new dimension in what music could be. It was a moment that propelled me forward and expanded my ability to grasp a much wider array of what music could mean in life.

So here I sit in Copenhagen listening to that same song. A distant reflection, a current moment in time. It all seems as one.
Kim Kirkpatrick: Early in my teen years I was trying to learn how to play acoustic guitar, finger pickin', folk style. I recall a girl friend, (who I would have liked to be my girlfriend) named Corrina who was also learning to play and loved folk music. A few records from that time I can recall were by Pete Seeger, Phil Ochs, Woody Guthrie,, Elizabeth 'Libba' Cotton, Tim Hardin, Donovan's Catch The Wind. OK, I gotta admit I had at least one Peter, Paul and Mary record. I first heard Bob Dylan in 1964, a friend's mom had The Freewheelin' Bob Dylan LP (1963), and he wanted me to hear it. First off, it felt like the equivalent of sneaking into the liquor cabinet, not sure why, maybe he was not suppose to touch his parent's records. Anyway Dylan had me immediately, just consider some of the songs on side one, "Blowin' In The Wind", "Masters of War", "A Hard Rain's A Gonna Fall". Side two with, "Don't Think Twice It's All Right", "Oxford Town", "Talkin' World War III Blues"*. Direct, radical folk music, that powerfully surpassed any of the above musicians I was listening to. I was an eager follower of Bob Dylan, he could do no wrong fan, from that moment up to around Nashville Skyline and Self Portrait. I hung in there with him through New Morning, but by then my musical interests were vast and his releases were not all that interesting to me.
*
And "Corrina Corrina"
Posted by Bob Burnett at 1:16 AM