Built To Spill:There Is No Enemy 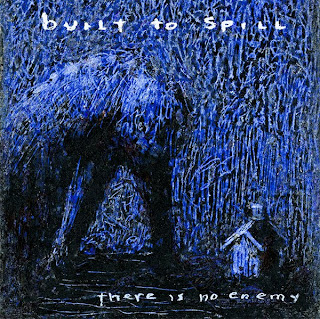 Kim Kirkpatrick: If you read my recent post regarding Built To Spill and my slow process of coming around to an appreciation of them, you know their Live release in 2000 was my turning point. Following Live Built To Spill released Ancient Melodies Of The Future (2001) and You In Reverse (2006); both were inconsistent with up and down moments, and unfortunately aimless guitar breaks. There Is No Enemy was released in October of this year and this one is a major improvement, the vast majority of songs are sharply honed, rich in content, and the band's performance is exceptional. Doug Martsch's playing, melodies, and lyrics have reached his highest and most consistent level to date. I continue to revel in the skilled fluidity and communication of the core band, Doug Martsch (guitars and vocals), Brett Netson and Jim Roth (guitars), Brett Nelson (bass), and Scott Plouf (drums). There Is No Enemy initially presents itself as big guitars, catchy pop music, but further listening reveals the lasting qualities of beautiful melodic songs, and Martsh's insightful observations and examination of life.
Neil Young still comes to mind as an influence, and an obvious comparison. Like Young, Martsch is on a high level with his enthralling guitar playing and the emotional depth of his lyrics on some of his best songs from the past and nearly all of There Is No Enemy. Both men are driven to search for universal truths, raise big questions about existence, and they lay out intimate, shared human contact and emotions. On There Is No Enemy Martsch has reached a new maturity lyrically. Consistently having something to say, he has clearly opened up personally in these songs. The melodies are bountiful and truly stunning, the songs are constructed with perfection, precise, but still seeming to be freely performed. I often wonder how many listeners really appreciate the difficulty and art of such accomplishments*. The majority of this Built To Spill release is like listening to Luna if they'd spent a year bulking up in the gym. This comparison (admittedly amusing) is meant as high praise, the song writing and Built To Spill's playing have a comparable refinement to Luna's concise, pop perfection, but in a pumped up form. "Life's A Dream" is an excellent example:
Miles till dawn
But it feels so dark till then
Drowns you out
But you can't be too certain
Common wants
Only fill me up with need
Everybody
In this world is just like me
So I
Row on
Sounds like fear
Thinking there might be a cure
Waste your life
But you don't know what it's worth
Comb your mind
For all the treasures of this earth
Too close to find
Anything inside yourself
So why
Row on
Life ain't nothing
But a dream
Realistic
As it seems
@ 2:05 a guitar solo break enters with "simple" lines, beautiful sliding notes, pull offs and hammer ons, building dynamically, bending, staccato, singing notes, and then smoothly the band backs off to:
Destiny's vulgar
So I might as well resist
Out of the darkness
And all the secrets still exist
Finally decided
And by decide I mean accept
I don't need all those
Other chances I won't get
So why
Row on
Life ain't nothing
But a dream
Realistic
As it seems
On There Is No Enemy electric guitars are still paramount, with a general tone of tube driven distortion, chiming guitar accompaniment, and effects galore; octave, chorus, spatial reverb, lots of impressive wah wah pedal work, and plenty of tasteful tremolo on this CD. These effects are yet another instrument in the hands of Martsch, Netson, and Roth, three equally creative, dynamic guitarists. I imagine each of them have substantial pedal boards laid out before their feet and they are used consistently throughout this release. What separates the effects laden songs, and Built To Spill's There Is No Enemy specifically, from the many indie, guitar jamming bands they are compared to? All the effects, the decades of developed guitar playing skills are pinpointed to serve the song's colors and moods. No one is playing guitar hero here, or stepping into the spotlight, solo breaks are concise and showcase the interplay as much as any specific player. Scott Plouf's drumming is thoughtful, thuddingly holding it all together. I particularly enjoy his relaxed, hanging back style on many of the songs, and how the negative space/time between the beats he creates are every bit as important as the beats. The bass player, Brett Nelson presents plenty of variety, some times pushing the band, and other times picking his accents. I particularly like the songs where his notes are drawn out, allowed to hang, and spatially offer up the heaviness of dub.
Built To Spill's There Is No Enemy consistently got to me, the performance and the content. This release is an example of why I am still drawn to rock, still finds sustenance within it, and a connection with the genre. The striving for perfection, honesty, performed seemingly with ease and familiarity is a rarity in any genre or medium of Art. We've got an example right here, give it some of your extended time... loud!
*
The following link will take you to "about to spill", a nice short piece with related thoughts by Martsch's wife that are interesting and insightful.
http://www.myspace.com/builttospill
Posted by Kim Kirkpatrick at 9:31 PM