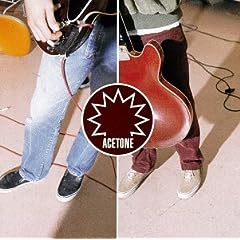 Kim Kirkpatrick: Acetone fit in an essential comfort zone for me musically. One also inhabited by Low, American Analog Set, Yo La Tengo, Mazzy Star, and by now I bet you can fill in more bands that are appropriate. Personally, I think Acetone creates a classic sound, with big atmosphere, big guitars, and a sound that is as much about the spaces as it is the notes.

Acetone surfaced with a generally fast paced release (Cindy, 1993 on Virgin), with heavy, fuzzy guitar, played by Mark Lightcap, and a fine, loose sounding bass tone from Richie Lee who also was their main vocalist. The trio was completed with Steve Hadley on drums. With a quick revisit of the first four songs I hear Low, Neil Young (Freedom period), Ride, and The Byrds speedy psychedelic sound on “So You Want To Be A Rock ‘n’ Roll Star”. Oh yeah, Cindy has some heavy, '70s funk 'n roll elements too. When Cindy was released Acetone was compared frequently to The Velvet Underground, we are not surprised, are we? All of the above is meant as positive comparisons. The one consistent element Acetone brought ( from these bands) was their driving sound.

In 1995 Acetone released an EP, I Guess I Would on Vernon Yard Recordings, a subsidiary of Virgin and also the label for Low. This EP was made up entirely of country cover songs from the likes of John Prine, Jerry Cole, Smokey Stover, and Johnny Horton. On this excellent sounding recording Acetone reveals music that inspired them, and the band’s performances fit along side the vast, historical country tinged rock sounds of L.A. and The Strip. Acetone covers these songs honestly , and they compare well with the country styles of The Byrds, Neil Young, and Gram Parsons. Overall I Guess I Would lopes along, with some fine twang and fuzzed guitar. The last cut is “Border Lord” by Kris Kristofferson and what a step away from the slower, long strides of the other songs. This song is slightly over ten minutes of extended guitar soloing with stunning Ride-style wah pedal work, country fuzz, and "Lightcap" closing it out with a soft, staccato style, twisted solo.

Just one year later Acetone released If You Only Knew, a full length CD described aptly by Richie Lee as “real slow” and “the pinnacle of quietness”. Lee’s bass playing is up front, with a warm recording hinting at strings and frets being touched. His playing seems to carry the slowest songs, noted from the title track and first song on the CD. "If You Only Knew" has expressed emotions and feelings like a cross between VU's "Candy Says" and Low. His bass playing is marvelously fluid and slithers through coolly on these really, really slow beauties. On occasion the guitar work by Mark Lightcap fuzzes out wonderfully, and is down right nasty. On “99” his playing soars with a blending of The Byrds' “Eight Miles High”, Blue Oyster Cult's “Don’t Fear The Reaper”, and surf/spy tunes, whoa!

Initially I was going to just write about this next release, the self- titled Acetone from 1997. Just prior to this recording Vernon Yard dropped Acetone but with the help of a friend, Jason Pierce of Spiritualized, they were signed to Neil Young’s label, Vapor Records. Acetone to my ears is a defining recording for the band, the point where it all came together perfectly. Richie Lee in an All-Music Guide interview stated, “On this record there was more of an emphasis on recording live. Keeping things simple in the studio yielded stunningly complex and sublime results on Acetone”. Overall this recording is slow, dark, and brooding, down but beautiful.

York Blvd. was released in 2000, also on Vapor Records, and would be the last recording from Acetone. The songs are flowing, floating experiences, some even approach the beauty and blues feel of Jimi Hendrix’s slower songs. For this final Acetone recording Jason Yates joined the trio playing a Hammond B3 on several tracks, a perfect atmospheric addition. Greg Leisz also appears on several songs playing pedal and lap steel guitars.

Richie Lee and Mark Lightcap formed a band in 1987 while attending Cal Arts Institute in Valencia California. At the time Lightcap was studying music composition (and playing the tuba), Lee was a painter and photographer pursuing a Fine Art degree. Lee and Lightcap completed their trio by recruiting Steve Hadley (drums) from a nearby high school, thus completing a trio that would play together for 13 years. In spite of their long history of creativity and steady recording Acetone never received the recognition or support many of us thought they deserved. They were overlooked somehow, never in the right place (or style) at the right time. Instead they followed their own artistic interests and muse. Richie Lee committed suicide in July of 2001.

"Things Are Gonna Be Alright" (from York Blvd.)

Believing things are gonna be alright?
Not to decry the simple life
But lately I've been getting tired

Just getting by
Biding my time
Now I've always been so sure Someday, someday
But how long do you go on
Believing things are gonna be alright?
Posted by Bob Burnett at 5:20 AM