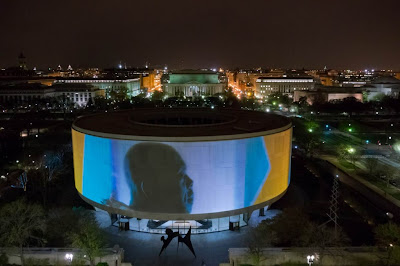 Bob Burnett: Doug Aitken's' 360 degree film project Song 1 will be concluding it's showing on March 20.  The filmwork has been screened nightly from sunset to midnight via 11 HD projectors on the facade of the Hirshhorn museum in Washington, DC. There's a full write up of the piece on the Hirshhorn's website.

Much has already been said about Song 1 being a groundbreaking work merging film and technology.  As a viewer my thoughts kept drifting towards James Joyce's concept of "the language of the night" used in Finnegan's Wake; a form of articulating the unconsious yet clear moments in life that may not have tangible meaning but create deep and lasting impact. The constant of Song 1 is the soundtrack; a variety of takes of the standard "I Only Have Eyes for You" mixed in with atmospheric natural sound from the environments where the images and people were shot.  The most notable version of the song is the haunting version from 1959 by The Flamingos. In addition to sitting still and watching one section of the wall, I walked around the perimeter and took in the mid-side doppler effect of the soundscape changing from speaker to speaker. Added visual charm was the in-proximity tree branches that picked up the flicker of the projectors--not to forget the projectors themselves: large, square HD boxes emitting strong light and movement.  The surrounding trees picked up reflections of the projections as well as added dimension to the foreground.

The experience created interesting people watching too.  There were several hundred viewers sitting around the perimeter, passersby on foot self-conciously walking by seemingly not knowing what to do with themselves or comprehending what they'd stumbled across.  Some flat-out showed their lack of intellectual curiosity by ignoring the whole environment. Oh well, that's their loss.  The final takeaway for me is Song 1 came across as a strong example of art in public places being a catalyst for making something happen.   The nightly screening created a destination for what's normally a quiet part of the city.  Additionally, it rethought the use of a structure and turned art outward instead of only within its walls.