A Young Person's Guide to Kyle Bobby Dunn+ some music 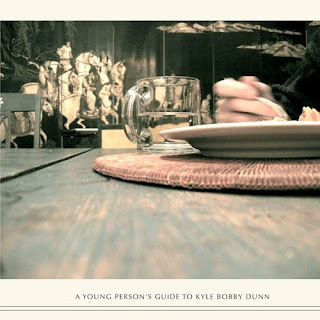 Bob Burnett: I haven't been "listening" to music recently. In fact, I recently went more than 2 weeks without playing anything on my stereo, computer or iPod. It seems music has tended to play a role of interrupting other events or moments--blasting from a nearby car with windows rolled down, playing in a public space as a shopping enhancer or as something happening in a restaurant and managing to soak into whatever I was doing or trying to do. In the past I was able to figure out a work-around to competing sources of music. One method was to recast the invading sound in a "suppose I listened to the sounds around me as if they were music,"John Cage-approach. That was all well and good until the sounds around became identifiable as Toto's "Rosanna".

All this is a roundabout way of saying I've fallen back into music thanks to the new listening experience Kyle Bobby Dunn and his A Young Person's Guide to Kyle Bobby Dunn collection has brought me--a 2 cd set that makes for two hours of much needed re-introduction to what music is capable of meaning. Inasmuch as Toto becomes identifiable from down the street, Dunn's music thrives on being a mix of a variety of sounds that blend and float into a lovely whole without the need to identify how they were created. The album drifts elegantly and beautifully--a series of flowing musical moments (in the 6-17 minute range for the most part) that at times reflect the natural world--pastoral yet not feeling the need to re-create the sounds of nature in a thematic "flute-as-butterfly"" moment. The sound is from a variety of masked and treated instruments (ie guitar, brass,strings) moving slowly in a way that brings you along the same way a good movie allows you to forget the edits and the camera moves. And for me, the same way Lamonte Young made The Well-Tuned Piano and Eno made Discreet Music do exactly the same. Needless to say, there have been repeated listens. I find I mostly enjoy playing Dunn's work through speakers, filling a room, increasing the volume and letting it expand the space.

I made the mixcloud sequence (included below) around his composition "Promenade". He sparked my ears in a way that allowed me to build other music around his into a mix, which became Air Curtain.

I hope you enjoy Air Curtain but I also hope you explore Dunn's music.


Air Curtain by C60crew on Mixcloud