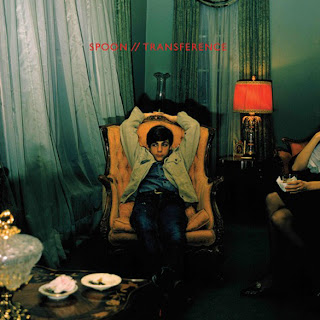 Kim Kirkpatrick: I have been surprised through the years by how many music fans I know who have missed out on Spoon. We all have bands slip by us, and I really enjoy backtracking - catching up on a band's output when I finally am turned onto them. But if Transference is your introduction to Spoon it may leave you feeling a bit foolish and wondering why you didn't notice them all these years. Spoon has been around for 17 years, released 7 full length albums, and 20 singles. Their first full length was on Matador, then they moved to a major label (Elecktra), got dropped after one release, and since then have released 5 albums on Merge (thank you Merge).
Transference is
Spoon* started out in the indie scene of Austin Texas, and were filed alongside other post punk bands of that decade. On Spoon's earlier releases one can hear the looseness and quirkiness of Pavement, the energy of the Violent Femmes, as well as the powerful blast of The Pixies. Spoon has outlived and surpassed such classifications, their influences are not paramount, and they have no nostalgia element in their music. After a particularly loud playing of Transference I've concluded this release is more than just an incremental improvement by Spoon - they have reached a new level of individuality and coherence with their music. Because of Spoon's intelligence, passion, and persistence, Transference presents an amalgamation of Rock/Pop music, albeit subtle, but it is audible in every song and each band member's playing. Spoon's musical parameters encompass the early 60s (Motown, Merseybeat) through multiple sources of the late 20th century, right up to today. Spoon has been inspired by and absorbed this musical history and now it all has come together wonderfully. Whatever direction their songs take, the music simply and profoundly sounds like Spoon.
*
The name Spoon was taken from a Can song, released on the classic Ege Bamyasi album in 1972. Can also used the name for their own record label, Spoon Records. You gotta love this kind of referencing and crossing over of decades and genres by musicians.

Bob Burnett: I'm drawn to the overall production of Transference---it has depth. You can feel there's space between the vocalist and the mic, drums are real, guitars are creating changes in the atmosphere and in general air is being stimulated with sound and not just hard wired into a mixing board. All these elements make it a huge plus for me as a listening experience. Additionally the songs have inventive structures all the while maintaining an element of (dare I say) "fun". I listened to the album with headphones in the middle of the night over the weekend. There I was, covered in a blanket on my "listening couch" bobbing and toe-tapping the whole time. Ah--the experience of listening to an album; a work in its entirety.....the pleasure of songs building and leading to another...the satisfaction at the conclusion of knowing you've heard something and are better for it!


Posted by Kim Kirkpatrick at 8:45 AM