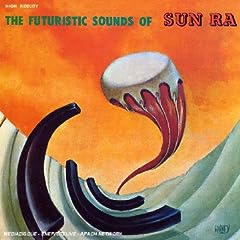 Bob Burnett: 1961 was a transitional time for the Sun Ra Arkestra. The group made the jump to New York City after spending 1954-61 in Chicago. They also signed with the Savoy label and the first studio outing in October found them creating The Futuristic Sounds of Sun Ra. This album is an excellent port of entry to the Sun Ra Arkestra if you've been looking for a way to approach the huge archive and sometimes difficult music of one of the 20th century masters. The Futuristic sound reflects the highly bop-laced, tightly arranged and executed music the seven piece ensemble was making at the time; it's sideways Ellington--and I mean that in a very reverent way.

Sun Ra's piano grooves with fat, rolling chords and meditative solos. John Gilmore plays bass clarinet and tenor sax and is joined frequently in solos and heads by Marshall Allen's flute, alto sax and handcrafted morrow, an instrument that consisted of a clarinet mouthpiece joined with a wooden flute. Pat Patrick's baritone sax also plays a major part. There's terrific percussion--performed en masse by the Arkestra--most notably "The Beginning" and "New Day" where strains of paleolithic Stravinsky meet the pulse of santeria.
The album was produced by Tom Wilson, whose production credits later included The Mothers of Invention's Freak Out!, Bob Dylan's Bringing It All Back Home as well as the single "Like A Rolling Stone" from Highway 61 Revisited and (oh yeah...!!!!) some album called The Velvet Underground and Nico. The Futuristic Sounds... was nicely re-mastered in 2003 and sounds very contemporary.

I call The Futuristic Sounds.. a point of entry into Sun Ra because I personally know the toll it can take if you incorrectly compute your atmospheric trajectory when approaching The Arkestra; you can easily bounce back into space and miss out for years to come. I recall trying to start with Live in Montreux 1976 as a teenager and running away very fast...overwhelmed but luckily unbloodied--however the album remained shelved for more than a decade ....luckily I discovered the Evidence label's deep archive when I was slightly older and somewhat wiser to the ways of Ra and was able to ramp my way all the way into the inner depths of spatial exploration. (albums such as Cosmic Tones For Mental Therapy/Art Forms of Dimensions Tomorrow for example)

Please explore what Sun Ra left; it makes for fascinating and unique listening experiences. I suggest reading through Robert Campbell's discography to gain a deeper understanding of the Sun Ra Arkestra's body of work.